I have decided that I want to write about a subject not much studied any more, at least not in America – the history of England. I have been studying English history from a young age; really, ever since I could get my fingers on a G. A. Henty or R. M. Ballantyne book. In my study of English history, I have decided to start where most historians consider to be the beginning of a civilized England.

I generally get my information from https://www.royal.uk, Wikipedia, and britroyals.com.

I have only my first article and my most recent article on this page. For other articles on the English monarchy, hit the red Archive button on the above right. 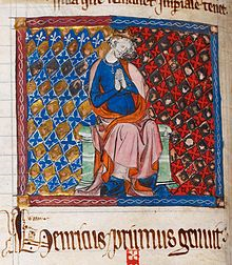 King Henry Beauclerc succeeded his brother William in 1100, after the latter’s death in a hunting accident. He was crowned in Westminster Abbey on 5 August of 1100, aged 31. Henry married Princess Edith of Scotland in 1100, after which her name was changed to Matilda. They had two children, Matilda and William. However, William was drowned in the White Ship accident in the English Channel. This was in 1120. After William’s death, King Henry had his English and Norman barons sweat fealty to Matilda, now the widow of Henry V, the Holy Roman Emperor. However, after King Henry’s death in 1135 many of the barons did not keep their vow for long. King Henry’s nephew Stephen of Blois claimed the throne, a claim which Empress Matilda disputed. This led to a period of anarchy from 1135 until 1153.

The Seal of King Henry Beauclerc

Robert Curthose, Duke of Normandy and older brother to King Henry, invaded England in a bid for the English throne in 1101. After arbitration, he agreed to return to Normandy. However, Robert returned in 1106 and was captured. He spent the last 28 years of his life as a prisoner in various castles in England and Wales. Henry usurped his brother’s duchy in Normandy, where he appointed viceroys to reign in his absence, and he also elected English barons to act as governors for him on his trips to Normandy.

King Henry died on the first of December, 1135 of a surfeit of lampreys at the age of 67. He was buried in Reading (pronounced Redding) Abbey. However, his burying place has been lost.